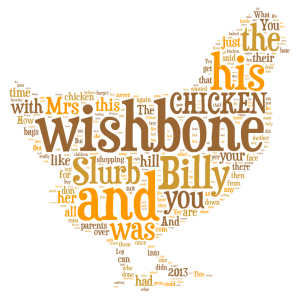 Wishbone Billy  available through All Good Bookshop or Amazon!

Mr and Mrs Slurb waddled down the busy high street, clearing a path with their great wobbling bulks.  Each step they took resulted in a wave-like movement as their flesh rippled down from their thick necks until it crashed at their enormous bottoms.

During this waddling, rippling, crashing motion, the pair used their great, fat fists to stuff extra-large burgers (with extra mayo, topping and burger, of course) into their cave-like mouths.  Mr Slurb snuffled a deep, wheezy breath of burger and dripping mayo, slowly turned round the large, neckless dome of his head and yelled (spitting pieces of burger on an unfortunate passerby) ‘Billy, get a move on yer lazy brat!  Do we have to do everyfink?!  Keep-up!  Yer mother will miss her TV programme!’

‘Yes, dad,’ gasped Billy, who in his hands did not have a burger or even a small chocolate bar treat but instead EIGHT bags of food shopping that he struggled to carry.  The plastic handles of the over-loaded bags had begun to cut deep into his hands, pressing on the bone beneath, whilst turning his fingers an interesting purplish-red.

‘Yer such a lazy brat,’ added Mrs Slurb with an equally distasteful shower of burger spit.  ‘I don’t know how yer dad puts up with it coz it’s driving me mad,’ she concluded with a purposeful bite of her burger to control herself over the dreadful behaviour of her child.

At the bottom of Ringslade Road, Mr and Mrs Slurb were leaning against a wall, huffing and puffing.  On almost any Saturday, at this point, they would do this at the terrifying thought of having to stagger up the slight hill, pass eight whole houses, to their door.  The thought of this terrible journey put the parents in a foul mood.

‘Yer ungrateful little toad,’ rasped Mr Slurb at his son who had just struggled around the corner carrying the eight FULL bags of shopping.  ‘Look at your poor mother all pasty like a fish.  How could yer be so selfish as to not help her up this hill?’

Billy stood silent and waited.  He knew what to expect next.

‘Yer miserable slug,’ gasped Mrs Slurb as she tried to catch her breath.  ‘Look at what you’ve done to your poor father.  He’s as white as a cod with worry for me.  You’ll drive us to an early grave.’

Billy stood silent and waited; the bags cutting deeper into his hands.

‘Well, don’t just stand there yer slimy maggot.  Get up that great hill, drop the shopping off, and come back and help us,’ said Mr Slurb rasping loudly.

‘And be quick about it,’ added Mrs Slurb gasping loudly.

Billy struggled up the hill with the shopping, pass the Slurb’s broken front gate, put down four of the bags of shopping and desperately fumbled with his throbbing fingers in his front pocket for his key.  Painfully, he turned the key in the rusty lock and pushed open the door.  He picked up the four bags and stumbled pass the sofa and armchairs, past the dining table, to the kitchen where he gratefully deposited the shopping on the floor.  Spending no time to rest, Billy went down the hill, and then up the hill again helping his mother to a brown armchair once in the house.  And then he went down the hill again and then up the hill again, again helping his father to the other brown armchair in the house.

Finally, Billy closed the front door and flopped down exhausted on the sofa. His hands throbbed with the pain of pins and needles as the blood was once again allowed to flow through his aching fingers.  His back screamed with the pain of bending over and carrying eight full bags of shopping.  And with the pain of supporting his parents up the hill.  His clothes stuck to him like a wet swimming costume as sweat poured down his face and body.  Billy looked at his parents huffing and puffing in their comfy armchairs and said nothing. He had learnt this over many Saturdays over many years.  Inside him, the unseen ball of hate for his parents just grew a bit bigger.

First, his father stared at Billy in disbelief.

Second, his mother stared at Billy in disbelief.

Then both of them stared at Billy in disbelief.

The huffing and puffing grew louder.  But this was not because of horrible, physical exertion.  Oh, no.  This was a new kind of huffing and puffing of people who cannot believe their eyes.  They cannot believe what they are seeing.  And this also causes the onlooker to briefly lose the power of speech.  How could this be?  How could this boy, this child, who they had brought into the world, clothed and schooled and pampered – yes, pampered – with a Christmas toy, treat them like this?  He was just sitting there on the sofa doing nothing.  NOTHING!  Can you believe it?

Mr Slurb was the first to regain the power of speech, ‘Can you believe it, Mother?  Our lazy child is just sat there while there is work to do.’

‘And soon dinner will have to be made,’ added Mr Slurb.

‘Are we to starve because of this sloth?’ added Mrs Slurb with alarm.

Billy said nothing.  He dragged his weary body to the kitchen to do his next chore before dinner.  Little did he realise that a terrible disaster was about to happen.

Billy put the last item of shopping, a tin of baked beans and sausages, on the shelf.  It was a favourite night time snack of his mother who loved nothing better than sitting in bed snuffling the lot straight from the can.

‘Is it all done?’ asked Mrs Slurb from her comfy chair.  She was busy stuffing her enormous face with a family sized pack of crisps.  A fountain of soggy, chewed crisp bits flew from her mouth each time she spoke.   ‘Yeh, it’s about time, you idle leach.’

‘Yeh, me and your mother are starving. I can feel my ribs beginning to poke through,’ added Mr Slurb feeling his bulbous flesh for bone.

Mrs Slurb heaved her bulk out of the chair and waddled her way to the kitchen.  This was her heaven.  She surveyed the tiled land for any signs of shopping.  Nothing must get in the way of dinner.  Nothing.  Dinner was a sacred time in the Slurb household.

‘Right.  Pass me the chicken and be quick about it,’ ordered Mrs Slurb the General.

‘Well, then.  Where is it?  Don’t just stand there like a wet frog.  Give me the chicken!’

Billy took a deep, frightened breath and stammered, ‘There is no chicken.’

‘WHAT?! NO CHICKEN?! Are you sure?’ yelled Mrs Slurb in absolute shock.

Mrs Slurb had to steady herself by placing her chubby, great hand on the cooker.  This was a disaster: no chicken!  They ALWAYS had chicken on Saturday.

‘What’s the matter?  What’s the little slug gone and done?’ he asked, glaring at the boy.

‘He says there is no chicken.  That we didn’t buy one,’ Mrs Slurb spluttered out.

‘WHAT?!  NO CHICKEN?!  But it’s Saturday.’ Quickly, like a bus reversing, Mr Slurb opened all the cupboard doors.  No chicken.  The fridge.  NO chicken.  The cooker.  NO CHicken. Even the bin.  NO CHICKEN!  This was a disaster.

‘I blame you,’ Mr Slurb stated pointing a sausage-like finger at Billy.

‘What can be done?’ asked Mrs Slurb, glaring at Billy.  ‘Why didn’t you remind us?  I can’t understand it.  Do you want your family to starve?  On a Saturday of all days?!’

‘No,’ said Billy in a tiny, trembling voice.

‘There is only one thing to be done. You ‘said Mr Slurb, stabbing his finger at Billy, ‘You must go and buy a chicken.’

‘Yes,’ said Mrs Slurb, nodding in agreement, ‘and if you don’t find one, don’t come back.’

‘Quite right, mother.  He should have reminded us.  It is all his fault,’ said Mr Slurb shoving some money into Billy’s hands.

The decision made, the guilty judged, Mr Slurb and Mrs Slurb returned to their comfy armchairs.  Billy stood in the kitchen trembling.  He just had to get a chicken.  Where could he get one?  What could he do?

Wishbone Billy now available through All Good Bookshop or Amazon!

First three Chapters now available to listen to for free! 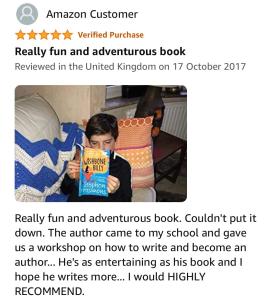 One thought on “Wishbone Billy”

This site uses Akismet to reduce spam. Learn how your comment data is processed.