There’s a condition that plagues all writers. If you come across a writer of any sort who says they never suffer this then they are a liar. It’s the Little Devil On Your Shoulder that whispers in your ear. Some psychologists call it imposter syndrome and writers may refer to it as writer’s block but I know better. It is an invisible devil that sits there waiting for you to write. Just as pen touches paper it begins it’s games. It tells you You Can’t Write. It laughs Call That A Sentence? It says Everyone Will Think That Rubbish!

My devil still pesters me despite kids secretly reading Wishbone Billy at night or having 5 star reviews on Amazon or receiving positive responses from my author visits. That devilish negative voice can be so loud. It stops you from writing anything. You procrastinate: watch junk TV, tidy the house, daydream. The pen lies still.

I am not the only writer to suffer the devil. Vivian Gornick, critic and journalist says of it: I would look at the words on the page – still do – and think, ‘This is so naive. This is so stupid. Who’s going to want to read this?’ It was even said of the brilliant Scott Fitzgerald of Great Gatsby fame that he fell into the devil’s hands after an estatic review from Gilbert Seldes. Poor Fitzgerald, after that every word had to be brilliant, every work deserving of high praise.

The devil by the ear attacks children too. I see it every day. It tells them they can’t write. It laughs at their efforts. Their page remains  empty. Their teacher grows impatient. What can be done? We must fight against the devil together.

Pick up that pen. Strike a blow to the devil’s head. Tie it up with adjectives, smother it in similes, drown it in metaphor. Let your pen roam free. It doesn’t matter what you write. It can be as sensible or silly as you want. You can write. You’ve been writing since your first crayon marks in nursery. Each word deserves an ovation. That devil knows nothing. Kick it away!

This piece of writing waas brought to you care of one squashed devil. 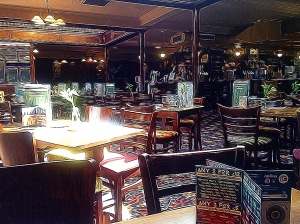 Most writers have a favourite writing space where they like to write and I am no exception.  It is a place where we find it easier to switch into writing mode and concentrate  on the worlds we are creating. They are part of our routine and without them we can writing frustrating, full of distractions, a basic non-starter.

Where writers choose to write can be varied depending on finances, personality or necessity. Stephen King, the famous horror writer, in the early days of his career found himself strapped for cash and the only place he could go to was the cramped laundry room of his house next to the washing machine. Perhaps it was the whine of the spin cycle that helped him produce his book Carrie.

Mark Twain, the writer of children’s classic The Adventures of Huckleberry Finn, didn’t have that problem due to the fame and fortune his books brought him. He had a private study built away from his house in the garden where he used to go after a good breakfast to write during the day. If he was wanted by his family, they would blow a horn to fetch him. I can just dream of having such a writing place.

Roald Dahl, the writer of so many great children’s book (and my favourite kid’s author) was more modest in his writing space. He used a shed in his garden with a favourite armchair and a space littered with objects to inspire.

Charles Dickens also had favoured pieces of furniture: a desk and chair. It was so important to his writing that he would often get it shipped with him if he was going to be away from his home for a while.

I don’t have the garden size or finances for a shed or study but do have a ‘work room’ where I have a computer desk and swivel chair. This was where I typed up Wishbone Billy from my notes every evening in 2012 but it wasn’t where I created the first draft. Here, is where JK Rowling and I are similar. Her early drafts of Harry Potter were written in a cafe, for, as she put it, ‘You don’t have to make your own coffee, and you don’t have to feel like you’re in solitary confinement.’

I equally have to be with an easy supply of coffee and the gentle bustle of people as they come in and out of the pub I work in. I sit at my favourite table, slightly apart from the main part of the pub, under dim lights, with free coffee refills aplenty tapping away on my Bluetooth keyboard connected to my iPad mini whilst listening to the gentle notes of The Poet by Bruno Sanfilippo  (my go to writing music that always gets me in the zone). It is my writing place as I’m away from the distraction of daytime TV or easy access to the Internet – the internet at the pub is quirky at best so stops me from going down the wormhole of Twitter. Besides, it has the bonus that I can reward myself with a pint after a few productive hours of writing.